Changing the narrative starts with us. We are our own best advocates. 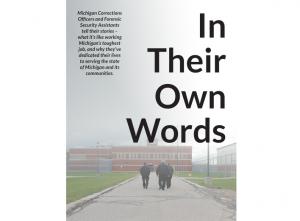 That’s why MCO is pleased to introduce a new publication, In Their Own Words. It tells the stories of 10 MCO members who are doing great things in their communities, such as serving on school or township boards, coaching kids’ sports, or fighting drugs in their communities. One member helped found a charter school so the children in her small town wouldn’t have to ride a bus to a faraway school when their local school closed. Another member told his story of working as a translator for the U.S. Army in Iraq.

In Their Own Words was on display at the Fallen Officers Memorial Open House. Legislators, MDOC administrators, and other decision-makers picked up a copy.

We hope to publish more editions of In Their Own Words in the future. Are you or one of your coworkers doing great work in your community?  Let us know and we might interview you for the next edition. Email Communications Director Anita Lloyd.

Below are excerpts from In Their Own Words:

On the importance of volunteer work:

Johnny Fountain, KCF: First of all, it gets you out there and you need the camaraderie of good, positive people that are trying to do the right thing, rather than all the negativity that you deal with on a daily basis in prison. You need to get out in your community and do something, anything.

Ritchie Gallatin, ARF: It lets people know that you are human and that you care. That you’re not just here in this community working, but you live in the community, and you care what’s happening in the community. You want to be an integral part of it.

On the importance of corrections officers seeking leadership roles in their communities:

Steven Smith, MTF: (Leadership roles are) one of the best ways for us to be liaisons to the community so that (people) can see that what they see on TV and on the news does not define corrections officers as a whole. Some people don’t trust police officers, and they don’t trust corrections officers. They have a very negative opinion about both, but it’s individuals like myself and others that meet them, talk to them, and change their minds. They’re like ‘You’re not what I thought a corrections officer typically would be.’ That’s important because we have been stereotyped so many times, and this is the only way, by us being active and being seen in our communities, that we break those stereotypes.

On what the public should know about corrections work:

Caleb Follett, IBC: As leaders from every branch of government discuss criminal justice reform and lowering recidivism rates, I find it important to note that corrections officers care about these topics and also possess experiential knowledge that cannot be replaced by (but perhaps can work in tandem with) academic models. I believe that effective reform can only come when corrections officers, those on the ground, are given a voice in these matters and an equal voice in the formulation and implementation of laws and policy decisions that will have a direct impact on the safety, well-being, and success of our institutions.

I think it’s a very important job, and people should appreciate that. Corrections officers are sacrificing and they give a lot of their time and their effort dealing with these inmates. And I’m proud of it. We’re do­ing something for our country. We’re protecting our friends, our neighbors, everyone outside the prison by taking care of these inmates and trying to mold them into better people when they leave the prison.