At a court hearing Wednesday, Feb. 17 on the RUO and CMUO classifications abolishment, the Honorable William Collette criticized the Civil Service Commission and state lawmakers, who he said seem insistent on cutting wages and undermining long-standing authority.

Attorney Jason Hawkins, representing the state, said MDOC staff had been improperly classified for more than 30 years before the classifications were abolished. RUOs were really performing the work of corrections officers, he said. Judge Collette wasn’t buying it, saying MCSC “finds a way to justify everything it’s done.”

A classification study, conducted in 2012 after the abolishments, found wide discrepancy in how former RUOs answered a question about whether treatment was part of the RUO job. MCO’s outside legal counsel, Mary Ellen Gurewitz, said treatment wasn’t defined, and that caused confusion.

RUOs were in fact part of an overall treatment team that focused on rehabilitating inmates, Gurewitz said. She pointed out that one former RUO, in her testimony from 2012, said an RUO was actually a corrections officer, supervisor, an army sergeant, and a parent in one.

Gurewitz noted that in 2006, MCSC conducted one of its many periodic audits of the RUO classification and again found it was appropriate.

The real reason MCSC and MDOC abolished this classification was to save money. The former MDOC director said RUO wages were too high, and this was one way to change that, Gurewitz said.

“Do you think they freed up enough money to pay for the legislature’s new building?” Judge Collette asked. “They’re cutting everybody in order to give themselves more, that’s all it is.”

Just to be clear, no ruling was made Wednesday. Judge Collette will render a decision in writing. It’s likely that the side that doesn’t prevail will appeal the case to the Michigan Court of Appeals.

MCO has been fighting the classifications’ abolishment since 2012. See a recap of our actions. 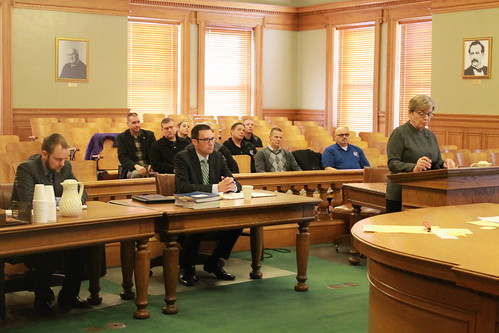