The Michigan Correctional Officers’ Training Council has named Craig Altoft of Michigan Reformatory as the 2016 Corrections Officer of the Year.

“Craig Altoft is an excellent corrections officer. He has set an example we should all strive to match,” said Bill Henderson, MCO treasurer and union representative on the Training Council. “All the  candidates have outstanding records of leadership, service, and dedication. Congratulations to all facility officers of the year.”

Altoft trains officers in weapons, cell rush techniques, and Taser use, in addition to being an OJT mentor. His coworkers who nominated him for RMI’s facility officer of the year describe him as reliable and knowledgeable. They also say he encourages staff members and communicates well with inmates and staff. He responded heroically when an inmate seriously assaulted an officer in December, bringing as much calm as he could to the situation.

Altoft started his MDOC career in 1994 at Deerfield Correctional Facility, where he served on the Emergency Response Team. He transferred to RMI in 2009.

Finalists:
Paul Jensen, Ionia Correctional Facility
Jensen has received numerous accolades over the years, including a Life Saving Award, Director’s Award, and two letters of commendation from his warden. He has also received the Good Government Symbol of Excellence for his work as the MCO ICF chapter president.
Jensen, a US Marine Corps veteran, also volunteers with several organizations in his community.

Paul Schneider, Thumb Correctional Facility
Schneider works with youthful offenders unit, where his “calm and consistent manner” has diffused many tense situations, according to his nomination materials. He has an excellent work ethic.
Outside of work, he teaches Bible study, coaches a traveling baseball league, and mentors the Lapeer High School Robotics Team.

Jeff Vanderkooy, Muskegon Correctional Facility
Vanderkooy is an 8-year MDOC veteran and a bid yard officer.
He remains calm in times of emergency, like when a prisoner was unresponsive on the yard. He is often the first officer to answer calls for assistance, according to nomination materials. Vanderkooy consistently comes up with innovative ways to improve safety and efficiency at MCF. His volunteer service includes the Special Olympics Law Enforcement Torch Run.

Rita Wise, Women’s Huron Valley
Wise has nearly 20 years with the MDOC, first at Scott Correctional Facility, and now at WHV.
Wise implemented an art program at a unit at WHV and the “Excellence in Room Standards” program, which encourages tidiness in the unit. She leads by example and trains new officers, her warden wrote in her nomination. Wise is a former MCO chapter president and former chapter steward.
Wise is an active volunteer at her church.

Congratulations to CO of the Year Craig Altoft, the finalists, and each and every facility’s officer of the year!

For photos of the Officer of the Year and the finalists visit us on Flickr at flickr.com/photos/mcoshots. 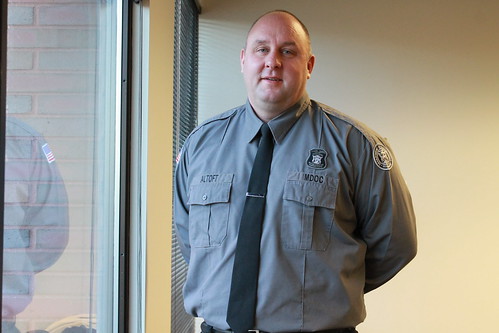