“We had an excellent turnout,” MCO President Tom Tylutki said. “Corrections officers have dangerous jobs where anything could happen at any moment. I appreciate everyone who came out today to join us in acknowledging those officers who have made the ultimate sacrifice and those currently working behind the walls to keep Michigan communities safe.”

“This memorial is our way of ensuring the sacrifice of these officers is never forgotten,” said Jeremy Tripp, MCO Director of Governmental and Political Affairs. “Through this memorial, we are sending a powerful message to the fallen officers’ families and to all officers: your union understands and appreciates the dangerous nature of your job. We won’t forget about you and we won’t stop fighting for you.”

SEIU President Mary Kay Henry spoke at the ceremony of MCO and SEIU’s OneVoice national campaign, which seeks to elevate the voices of Corrections Officers and provide them a voice as corrections reform is debated around the nation.

“We need to make sure the public and policy makers understand the challenges that you (Corrections Officers) face,” Henry said. “The goal of OneVoice is to make sure corrections officers have a seat at the table as changes are discussed. We want to work shoulder to shoulder with MCO. We should all strive for a just society where all work is respected and treated with dignity.”

“Corrections officers are on duty 24 hours a day, seven days a week, and they face a lot of danger, aggression, and insults,” MCO Vice President/Chief of Staff Andy Potter said. “As corrections reform moves forward, our hope is that the voices of these fallen officers and the voices of corrections and forensic officers who are still working do not go unheard inside these changes.”

To mark the occasion, MCO created a special commemorative coin that was given to all guests. The memorial honors the fallen, but the coin acknowledges those currently working behind the walls.

“Whenever someone looks at this coin, we hope they reflect on us, the corrections officers, working at that very moment. We put our safety on the line in service to our communities every day,” said Lorraine Emery, corrections officer at the Bellamy Creek Correctional Facility.

Michigan Corrections Organization/SEIU represents more than 6,500 corrections and forensic officers working at state prisons and at the Center for Forensic Psychiatry. 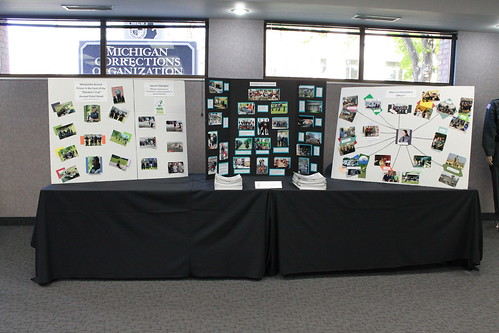