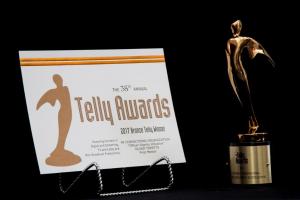 LANSING, MICH. – The Telly Awards has named Michigan Corrections Organization (MCO) as a bronze winner in the annual Telly Awards for their piece titled “Officer Dignity Initiative.”  With over 13,000 entries from all 50 states and numerous countries, this is truly an honor. Watch the award-winning video now.

The video presents the efforts of MCO and other strategic partners to protect employee dignity, promote consistent prosecutions, and hold inmates accountable for both liquid assaults and sexual deviant behavior toward corrections employees.

“When we first embarked on this project, we had no idea this video would be so impactful.  It was an honor to work collaboratively with our friends at Future Media to tell this important story about the challenges corrections officers face,” said Jeremy Tripp, Director of Government Affairs for the Michigan Corrections Organization.

The Telly Awards was founded in 1979 and is the premier award honoring outstanding local, regional, and cable TV commercials and programs, the finest video and film productions, and online commercials, video, and films.  Winners represent the best work of the most respected advertising agencies, production companies, television stations, cable operators, and corporate video departments in the world. 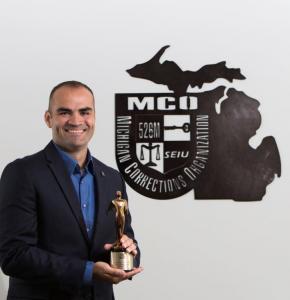 MCO Director of Government and Political Affairs Jeremy Tripp with his Telly award.

“The Telly Awards has a mission to honor the very best in film and video,” said Linda Day, Executive Director of the Telly Awards.  “Michigan Corrections Organization’s accomplishment illustrates their creativity, skill, and dedication to their craft and serves as a testament to great film and video production.” 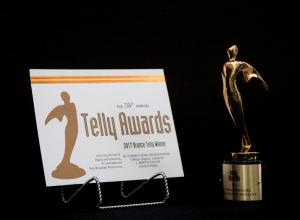 We are pleased and proud to have brought such an important issue to light and are honored this message was well received and understood. Corrections Officers do a dangerous job and as professionals they deserve our utmost respect.

To find out more about the Telly Awards visit tellyawards.com.

Michigan Corrections Organization/SEIU represents more than 6,500 corrections and forensic officers working at state prisons and at the Center for Forensic Psychiatry.