Representatives hold the 9/11 memorial event every year to honor public servants who lost their lives Sept. 11, 2001 and to recognize first responders who put their lives on the line every day in service to our state and our country.

Each representative may invite two first responders from their district. This was the second time corrections officers were invited to the event. Corrections Transportation Officer Jeff Reasoner was a guest in 2014.*

“I spoke with Officer Emery at a coffee hour in my district, and I was immediately impressed with her comments and poise,” Rep. Barrett said. “Corrections officers are professional law enforcement agents and deserve to be respected as such.”

Rep. Frederick said his friendship with Sholtz and contact with MCO’s legislative department convinced him that COs have valuable insight on the challenges facing the corrections department. 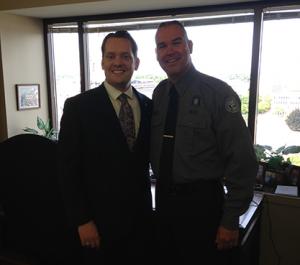 “I am very happy for the opportunity to recognize our corrections and law enforcement officers on this meaningful day. I certainly treasure my friendship with CO Sholtz and other officers,” Frederick said. “I look forward to future opportunities to meet with MCO members regarding improvements to corrections issues in Michigan.”

Officers Emery and Sholtz said it was an honor to represent corrections officers at the special event.

“We made some great connections today that will reinforce MCO’s advocacy work in the legislature,” Sholtz said. “We also met members of other law enforcement unions and discussed our shared values.”

“Michigan COs are among the best trained corrections professionals in the nation,” Emery said. “It was a morale boost to see that we’re appreciated by our legislators.”

* This story has been corrected to mention that an officer was invited to the event in 2014.