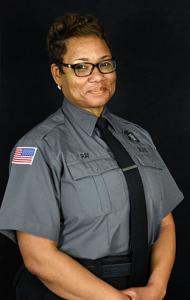 The Michigan Correctional Officers’ Training Council has named Elwanda Ray, an employee at Thumb Correctional Facility, as the 2018 Corrections Officer of the Year.

Officer Ray said she was humbled to be named Corrections Officer of the Year and was proud of the other finalists for the award.

“I’m humble and grateful because I truly, truly do love my job and what I do,” CO Ray said. “I love that I can make a difference in someone’s life.”

Officer Ray is a firm believer in the power of a positive attitude. She is a mentor in her community, to coworkers and to inmates in the Burns B unit at Thumb. She hopes the lessons offenders learn in prison will help them lead better lives after release.

“Your attitude can change everything. You don’t have to be negative,” CO Ray said.  “(In my unit), we say good morning. I encourage (prisoners), and hopefully that makes a difference.”

Officer Nugent, with 17 years with the MDOC, “demonstrates excellence when performing his duties,” wrote his warden in his nomination materials.

He takes his responsibility to rehabilitating inmates and to training new officers very seriously. His excellent communications skills have played a part in the lack of fights in the Level IV unit where he works.

CO Nugent started a Veterans Day cookout at JCF to support Sweets for Soldiers, a program that sends treats to service men and women. Nugent is a veteran and an MCO Military Advocate at JCF. 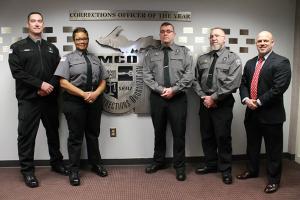 Officer Goodreau is a Security Threat Group team member and a former Emergency Response Team member. He was instrumental in transitioning a general population unit to segregation on short notice.

CO Goodreau uplifts coworkers and has earned the respect of both staff and prisoners, his warden wrote in Goodreau’s nomination. He has 21 years with the MDOC.

Investigator Johnson joined the ARU in 2015 after years as a parole agent, probation agent, and SAI drill instructor. Thanks to his prior experience, he brought a wealth of knowledge to the job. His nomination packet included no fewer than seven letters of recommendation.

“After reviewing each letter, I think that you will see that Tom is the epitome of professionalism, commitment and integrity,” wrote Lt. Charles Levens in Johnson’s nomination.

Officer Rowley has 23 years with the department and is a great role model for younger staff, his nominator wrote. He articulately raises his concerns and helped create new movement plans for medication and meal lines.

“He develops and maintains the highest-level honesty, integrity and rapport with his fellow co-workers, supervisors, other department personnel, vendors and clients as well,” the nominator wrote.

CO Rowley is a veteran of the Army and Marine Corps. His extensive volunteer work has included coaching, school functions, and helping elderly neighbors with yard work.

He is working on a master’s degree in professional accountancy.

Congratulations to the finalists and Officer of the Year Elwanda Ray!