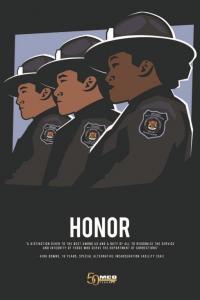 In corrections, the term honor can take on many forms. From high standards to personal achievements, honor is regarded and sought after by every member of our profession.

To many, honor is earned and at times comes with great sacrifice. To acknowledge these contributions, honor is this month’s value in the Michigan Corrections Organization – Move Forward Campaign. Throughout the campaign, we’ll introduce a shared value of our membership, accompanied by a unique poster, every month until Labor Day 2018.

The honor poster depicts the Michigan Department of Corrections Honor Guard, which celebrates its 30th anniversary this year. The Honor Guard was formed in response to the slaying of corrections officers Josephine McCallum and Jack Budd.

After McCallum’s death in 1987, departmental leaders recruited then inspector Bruce Curtis to put together a paramilitary style unit that would represent the MDOC at her funeral. Young recruits were picked from the correctional officer training academy and practiced for less than a week before the service was held. Sadly, months later, the Honor Guard was again asked to step in and provide representation at the funeral of Officer Jack Budd who was tragically killed by an inmate at the State Prison of Southern Michigan. 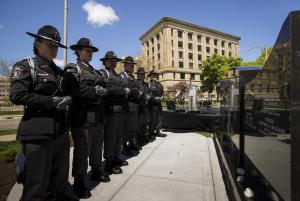 Now Honor Guard members from across the state, many of whom are COs, console the families and co-workers of fallen corrections staff throughout the United States. They volunteer their personal time to show solemn gratitude for those who have made the ultimate sacrifice.

To read more about the history and service of the Michigan Honor Guard, click here. 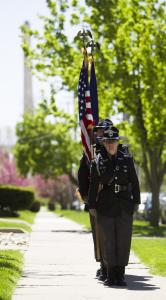 At times, we in corrections may not always feel honored or appreciated but it’s up to us to respect each other, honor our accomplishments and encourage each other to strive for this noble distinction. By honoring our coworkers’ good deeds, as well as our own, we can begin to change the image of corrections and rewrite the narrative that is falsely depicted in television and movies. If we don’t do it, no one else is going to do it for us.

Look for this honor poster and others in the series in your facility soon.

Have additional thoughts or a personal story about what honor means to you? Email Communications Director Anita Lloyd at anita@mco-seiu.org