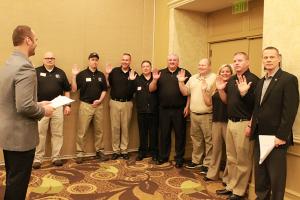 Please join us in congratulating the newly elected MCO State Executive Board!

Here are the results:

This Board will continue the great work the previous Board launched to engage members in a new way. Leaders are revamping our programs, and asking members what they would like to see in their union. We’re hearing from officers who are enthusiastic about the military members’ work, the officer dignity campaign, the corrections PTSD awareness initiative, and more. Stay tuned for further details on changes at MCO!