UPDATE 4:10 P.M.: The governor signed this bill today. This is another legislative win for MCO members and their families!

Thanks, members, for your support!

ORIGINAL POST 10:10 A.M.:The Michigan House and Senate have passed a bill that will provide health benefits for up to 60 months to the surviving spouse and dependents of officers who are killed in the line of duty. 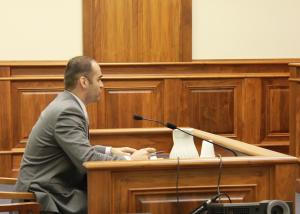 Jeremy Tripp, MCO director of government and political affairs, testifies before the legislature on a bill.

MCO has fully supported this bill since it was introduced in March of 2015 and made passage a central part of MCO’s platform when speaking with lawmakers and candidates running for office.

Jeremy Tripp, MCO’s Director of Government and Political Affairs, lobbied on this issue throughout the year and made clear the dangerous nature of corrections work and tragic situation a slain officer’s family is faced with upon an officers death.  Tripp also encouraged inclusion of Forensic Security Assistants and was informed that the fund administrator does in fact view those classifications as being covered by the legislation.

This bill was presented to the governor Sept. 23 and awaits his signature. See a history of action on the bill.

This legislation serves as an important reminder of the risk’s MCO Members face every day and the real world impact those dangers have on our loved ones.