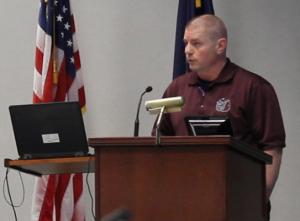 Michigan Corrections Organization made comments today to the Unmanned Aircraft Systems Task Force laying out corrections officers’ concerns about drones over prisons. MCO also issued a position statement to the task force, alerting them to the dangers drones pose, and will share the statement with legislators.

“We believe that proper defenses need to be implemented immediately to prevent future incidents from taking place and ensure the safety of institutional staff and those incarcerated,” said MCO Executive Board Member Brent Kowitz, who is also co-chair of the MCO/MDOC joint Health and Safety Committee, which has discussed drones. Read the full statement here.

The ultimate concern of corrections officers is that a weapon will be dropped into a prison. The statement asks for more equipment and training for corrections staff on drone detection.

The Unmanned Aircraft Systems Task Force was convened by Gov. Rick Snyder. The task force is scheduled to wrap up its work and present its findings in a report due Nov. 20.

“We wait anxiously for your findings as we have seen an increase in the use of UAVs near correctional facilities,” Kowitz said.

Corrections officers are very concerned about security threats presented by drones. At least five drone incidents have been reported at Michigan prisons this year, including the most recent last week at Bellamy Creek Correctional Facility in Ionia.

“The threats are not threats any more. Drones have been dropping contraband in prisons across the country, including Michigan,” Kowitz said. Below are a few links to relevant articles from other states.

MCO will continue to advocate for solutions that protect the safety and security of Michigan prisons.

“Men planned to use drone to get contraband into prison, officials say.” The Washington Post, 8/24/15