The Rotary Club of Ionia recognized the officers of the year from the Ionia facilities at a special event Wednesday. 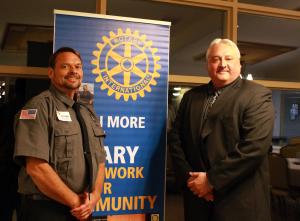 They took their advocacy a step further by holding a silent auction at Wednesday’s event to benefit the MCO Crisis Fund. The auction raised hundreds of dollars that will be used to support members facing a catastrophe. Thanks very much, Rotary Club of Ionia!

MDOC Director Heidi Washington attended the event and spoke about the department’s initiatives. MDOC and MCO leaders have a good relationship, even if we can’t agree on everything, Washington said. MDOC can’t implement real change without the support of front-line staff, she added.

Washington recognized MCO Executive Board Member Ray Sholtz and the MCO Military Members’ Committee, which is working to honor COs who are current or past military members. MDOC staff includes a few thousand vets, she said.

“I’m very excited because, starting this year for veteran’s week, we’re going to be rolling out a number of different ways that we’re going to recognize veterans.” Washington said. “It’s going to go on throughout the year, and for years to come. It’s a long, long time overdue.”

Corrections officers deserve respect and appreciation for the tough jobs they do. Thanks, Rotary Club of Ionia, for taking an evening to honor those who do Michigan’s toughest job!