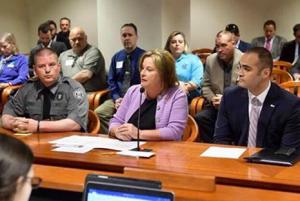 Next the bill goes to the Michigan Senate.

Thanks, members, for your support! Check back for future updates.

ORIGINAL POST May 9, 2018: In late February of this year, the Michigan Corrections Organization hosted a discussion with state legislators to discuss issues important to corrections officers.

That meeting, which included lawmakers of both political parties, provided a genuine opportunity for officers and staff to discuss serious topics with elected officials like post- traumatic stress, officer dignity, drones, recruitment and more.

After the meeting, the group of legislators was shown around MCO’s office by our Executive Board and staff. They saw and heard about the Correctional Officer of the Year Wall and Fallen Officers Memorial which was dedicated in May of 2017.  During that discussion, Rep. Julie Alexander (R-Jackson) struck up a conversation with Brent Kowitz, MCO’s chapter Vice President at Parnall, after noticing both Jack Budd and Josephine McCallum had worked in Jackson.  From there, the idea of renaming part of I-94 as a memorial highway was developed.

Fast forward to today, and MCO is proud to announce that HB 5923 has been introduced and passed out of the House Transportation and Infrastructure Committee. Under the bill, the State of Michigan would honor Jack Budd and Josephine McCallum for their ultimate sacrifice by naming the stretch of I-94 between exits 139 and 141 as the “Corrections Officers Jack Budd and Josephine McCallum Memorial Highway.”

This bill serves as a reminder of the importance of recognition and why we must always lift up the contributions and sacrifices of correctional officers.

We’ll keep you updated on this bill. Thanks, members, for your support.