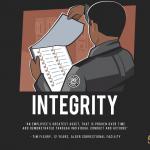 In life or on the job, integrity is among the most important values an individual can possess. It is central to earning the trust of the public and vital to building relationships with our co-workers, supervisors, friends and family. Integrity can mean something different to us all. For some, it’s simply following through on your […] 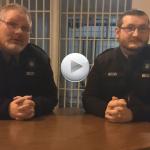 In many families throughout Michigan, public service is a tradition. The McVeans are one of those families. Jim (Mack) McVean just retired after a career with the MDOC of more than 25 years. His son, Maxwell, recently celebrated his 10-year anniversary with the MDOC. “We started working together at Macomb, and I was disappointed when […]

In 2016, MCO created the “officer dignity initiative” to hold inmates accountable for liquid assaults and sexual deviant behavior toward staff. Working with the State Police, Prosecuting Attorneys Association of Michigan, and the MDOC, our goal was to improve the department’s reaction and investigation of these incidents,  promote consistent prosecution, discuss new ways of protecting […]

As announced on this past Tuesday, the Michigan Department of Corrections is closing the Ojibway Correctional Facility in December of 2018. MCO met with MDOC officials on Thursday and agreed to designate the Ojibway and Baraga facilities as the layoff unit. MCO Executive Board members and staff will be holding informational meetings at the Ojibway […]

MDOC has announced the closure of Ojibway Correctional Facility, tentatively scheduled for Dec. 1. Read the MDOC’s announcement here. MCO leaders were notified this morning. There was no single reason OCF was chosen to close, according to MDOC’s statement. In addition to offering staff positions at facilities with vacancies, MDOC will work with the Department […]

Candidate vows to give front-line workers a seat at the table After careful consideration and review, the Michigan Corrections Organization has endorsed Democrat Gretchen Whitmer for Governor of Michigan. Whitmer, the former Minority Leader of the Michigan State Senate, has been a long-time advocate of corrections and forensic officers and has demonstrated a lasting commitment […]

Saturday is the last day to request to vote absentee in the Aug. 7 primary election. Due to unpredictable mandates and travel times between work and home, MCO recommends members consider voting absentee if possible. Download and print an application for absentee voting at the Secretary of State website. You must return the application to […]