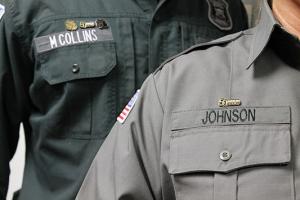 In facilities all over Michigan, MCO members are discussing Civil Service rule changes that are scheduled to take effect January 1, 2019. These changes are the result of a strategic attack on unions and another attempt by anti-worker organizations to silence the voice of workers and inject uncertainty about issues important to corrections officers and forensic security assistants.

Like our brothers and sisters who founded this organization, the members of MCO have met these attacks head on and refused to back down or be intimidated by politicians and cronies hoping for the worst.

At work, in bargaining or at Civil Service, we know that the fight begins with us and the only way to demand fairness and respect is by sticking together and standing united in our cause.

As a way of demonstrating our solidarity and commitment to each other, we are asking all members to wear this 50th anniversary pin on their uniform until the end of 2018.  By doing so, it sends a strong message – that you support your brothers and sisters and believe in the collective power of our union.

Also, it’s worth noting that MCO has heard rumors and chatter that supervisors are already saying they won’t allow officers to wear this pin but be aware that our contract explicitly allows members to wear pins to show our solidarity. This is a right and privilege most union members don’t have. Let’s not take it for granted and allow our colleagues to be given false information. 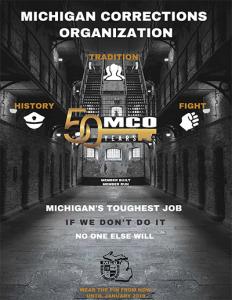 This pin also symbolizes your resolve and our union’s proud tradition of not allowing outside influences – the Civil Service Commission, the legislature, the Department, or whoever else – to divide or defeat us.

We’ve faced challenges in the past and the fact that MCO consistently maintains the highest rate of union membership speaks to the tenacity and dedication of our members.

Now we face another set of challenges and we know that one officer or facility can’t do it alone. It will take all of us fighting together to keep what we have earned and protect what others are so desperately trying to take away.

As always, it’s up to us and no one is going to do the work for us. MCO is a union of 6,100 individuals and we know that together there is leverage in numbers.  It’s time to stand up for each other and show our solidarity.  Wear this pin on your uniform for the rest of 2018 and let everyone know that together,  We Are MCO!