Stephen Cooklin, an Absconder Recovery Unit investigator based in Macomb County, has been named the 2019 Corrections Officer of the Year.

“I’m so excited to congratulate Stephen Cooklin, who was chosen for this honor due to his strong work ethic, his professionalism and his commitment to keeping the citizens of Michigan safe,” said Michigan Department of Corrections Director Heidi Washington. “In his role as an ARU investigator, he protects the public by apprehending fugitives who have fled supervision and works collaboratively with police agencies in metro Detroit and the U.S. Marshals.”

Investigator Cooklin, who is also a Task Force Officer with the U.S. Marshals Service, keeps communities safe by apprehending dangerous parole absconders. He handles a demanding caseload but is always willing to help other investigators and other law enforcement agencies. Last year, Cooklin received the MDOC’s Meritorious Service Award.

Cooklin started with the Michigan Department of Corrections in 1994 as a corrections officer. He has been an ARU investigator since 2011.

Cooklin said he loves his job.

“All absconders are on a path in the wrong direction, and it’s our duty to redirect them,” Cooklin said. “It’s challenging work, but I can’t imagine doing anything else. If you do what you love, you never work a day in your life.”

Bill Henderson, who represents corrections officers on the Officer of the Year selection committee and works a CO at Saginaw Correctional Facility, said all the finalists for the award this year were phenomenal.

“We could tell Cooklin speaks from the heart and is humble. He didn’t expect to receive this honor, but he deserves it,” Henderson said. “He’s a professional who takes great pride in his job every day – going above and beyond at work and as a leader in his community.”

Cooklin also spent 22 years serving in the U.S. Army and Michigan Army National Guard. He has volunteered with the Cub Scouts, Hampton Elementary in Bay City, and Macomb County little league organizations. Cooklin is married and has two children.

“This is one exceptional family, and I am so proud to have them both represent this department in such exemplary fashion,” Washington said. “Toni and Stephen are exactly the kind of employees we want in this department. The amazing work they do not only goes above and beyond while on the job, but also in the community in the many volunteer activities they take on.”

The Michigan Correctional Officers’ Training Council serves as the Officer of the Year selection committee. The council is made up of representatives from the MDOC, Michigan Corrections Organization, law enforcement, and higher education. They chose Cooklin for this honor from a pool of five finalists. 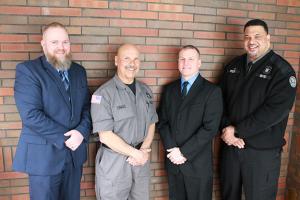 Congratulations to all facility Officers of the Year! They are: