Jack Budd was murdered at the former State Prison of Southern Michigan in Jackson 30 years ago today.

An inmate, armed with a weapon, came out of a shower area and stabbed Budd. His killer, James Miller, was sentenced to 80-120 years in prison. He is also serving two life sentences.

Budd left behind a wife and son.

Josephine McCallum was murdered at the same prison on March 24, 1987. Budd’s and McCallum’s deaths led to sweeping changes within the MDOC. Ad­vanced training, increased staffing, revised inmate discipline, and the breakup of the Jackson Central Complex into several smaller prisons were among the changes. Some of those reforms have been scaled back in recent years due to budget cuts.

Budd, McCallum and our other fallen officers were honored at MCO’s Fallen Officers Memorial Dedication this year.

“It’s very moving,” Sally Budd, Jack Budd’s sister, said of the memorial. “It’s beautiful because it’s so simple. It’s also a stark reminder of the danger of the job… 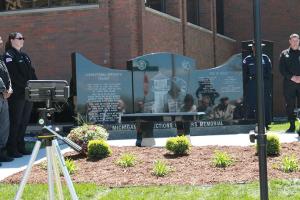 The Fallen Officers Memorial was dedicated May 7, 2017.

“The big thing is that people remember. It’s still fresh to (the family). This (monument) will forever be there and what Jack sacrificed will hopefully never happen again.”